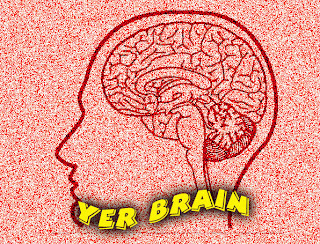 Yer brain is a funny ol' thing. F'rinstance my cousin Bill commented on a synopsis of the first book in my detective series, Four Johns and a Jill by saying that the lead detectives name was similar to his father's name, Max Billard.  My hero is Max Bullard.  I chose the name out of thin air with no thought whatsoever.
I had no thought about my cousin's father. I had no thoughts at all. Only after Bill mentioned the similarity, did I delve more closely into why my unconscious mind chose that particular name "out of the air".  First of all my hero is a little guy for a cop--only 5'3" 130 pounds, a marathon runner.  Max is a name that implies a lot of size, it is short for "maximum". It is ironic that a small guy should be called Max.  I compliment my unconscious mind for supplying this super bit of irony for me. Thanks, brain.

The second name is short for the older English name "bullherd" or "one who herds bulls". Since my tiny detective is a police Homicide Lieutenant he commands or "herds" a team of bulls (bulls is a common slang term for "police").

So this is your brain on writing--a lot like your brain on drugs, but not as much fun.  Coming up with cute and meaningful things like this hero's name without even trying is kinda amazing. In centuries to come when students of literature ponder my little detective entertainments, they will argue whether the name Max Bullard was a tribute or a reference to my cousin Max Billard, or whether it was a cleverly ironic construction referencing the hero's size and rank.

Neither analysis of the name by scholars would be correct. I picked the name out of the air without any thinking involved at all and would never have realized its cleverness had not my cousin Bill started me thinking.