HOME IS WHERE THE BILLS IS 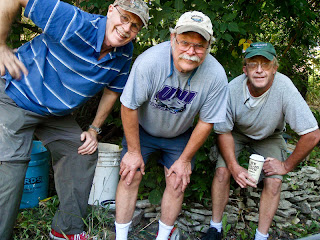 These are the faces of the three brave men who sailed down the length Mississippi River (by car) and landed in the pagan lands of New Orleans. The hazards they faced on Highway 61 (revisited) were without number, but the most challenging of them all was being confined with each other in car, motel room, tent, bar, for 24 hours a day bumping into each other's lunacy. Two painters and a poet--all too damned verbal and too damned stubborn and too damned smart to agree on anything. One overtly aggressive, one passive aggressive, and one cannily waiting in the wings to take the field when the two aggressive ones exhausted themselves. (No, I will not name names.)

The battle of the Mississippi is over now with no clear winner. (Men always count coup.)

While I was taking 192 voice notes and 155 camera notes for my next novel due out in 2013, Canada Post delivered a VISA bill, a Master Card bill, an American Express bill, a credit card processing bill, a Bell bill, a library fine, and a parking ticket from Keokuk, Iowa.  Reality sucks... The reality of being an artist really sucks. Maybe someone out there will buy a futures contract on the novel. Ya think?
at 9/22/2011 05:49:00 PM