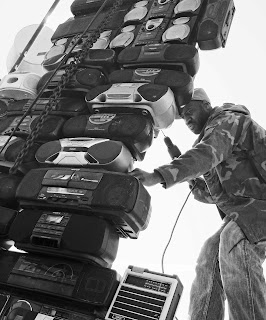 My book is coming together as we drive south to the Gulf along the Mississippi. We are only just north of Lacrosse, Wisconsin now, about the same latitude as London, Ontario with 5 or 7 days driving to New Orleans.  But the book is writing itself. It is writing itself as a debate between its two principle characters— a bad device.
We visited three “sculpture” gardens: the first was the vanity creation of a capitalist factory owner. It was a “walk of war” about a quarter mile long with memorials to every conflict the US started since the War of Independence, ending with a big smiling bronze of George H. W. Bush winning the First Gulf War.  The horror of this “walk of war, was that Bush was only at the half-way point, leaving about 1/8 of a mile of sidewalk empty for future wars.
We then went on to a “natural sculpture garden” with huge rocks and cracked rocks and broken rocks and potholes in rocks and magnificent bluffs overlooking raging rapids. God was having a jolly good laugh when she made this patch of geology.
The third garden was in a huge field surrounding an art school for sculptors—a wacky weird and wild collection of nearly fifty whimsical creations by the students and faculty. The pieces challenged our preconceived notions about damned near everything—floating houses, black boxes, cast-iron canoes and animals with too many legs or none at all. The photo above is of a student piece I called the Tower of Babel—hundreds of old boom boxes piled up to heaven playing the voices of local Minnesotans among selected songs.
We visited the St. Paul’s Cathedral in St. Paul, which, if memory serves me well, rivals or surpasses the magnificence, grandeur and even the size of Notre Dame in gay Paree.  From there, our next stop was the Treasure Island Casino, which, if memory serves me well, rivals or surpasses the tawdriness, glitz, sadness and abandonment of hope of the Treasure Island Casino in Las Vegas.  I won $7.72 and Carl won $5.25. Dennis ate a chocolate cookie that cost $1.50. Winners! Winners! Winners! On the way to New Orleans…
at 9/14/2011 09:47:00 AM