THE NOBLE SAVAGE ?--MY ASS! 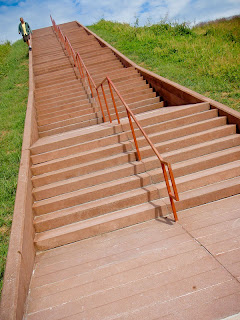 On our trip down Highway 61 along the Mississippi to Bourbon Street in New Orleans, we stopped at the largest archeological site north of Mexico--Cahokia, a village of 15,000 or more N'amerinds dating back about a thousand years. There are mounds there, the largest of which is shown in the photo above. It took centuries to build. The people who built it had to carry dirt from a fair distance away in wicker baskets--one 55 pound load at a time, climb the pile and dump it. I doubt the citizens of Cahokia carrying those baskets were whistling while they worked, more likely, the citizens were listening to the whistling of the lash. Ordinary working-class natives had better things to do than dump dirt because they lived in a very primitive agricultural society that plowed the fields with sharpened sticks and ground corn with rocks. Dumping dirt was probably not viewed as "recreation".

These were not nice people, or at least their form of government was not nice. For the working classes, it was a life of slave labor in this world piling us up dirt and creating surpluses for the ruling clan to flaunt and more slave labor in the "next world" to keep the Chief and his clan happy--even after death. "Noble savage" is a stupid white man's term that is only half accurate. The word "savage" by itself would suffice.

And although no one knows the exact reason this civilization collapsed after a few hundred years, the best speculation points to exhausting the farm land, internal strife and external wars--none of which fit any definition of "noble". These things sound like the very things that are collapsing our civilization--just plain savagery. People have not changed. 1000 years has not produced any measurable moral evolution in Homo sapiens .

Where there are surpluses, as there are in most social orders beyond the nomadic hunting and gathering orders, the aggressive minority will grab the surplus, create slaves and take their surpluses to the grave with them, leaving the working classes with baskets of dirt.