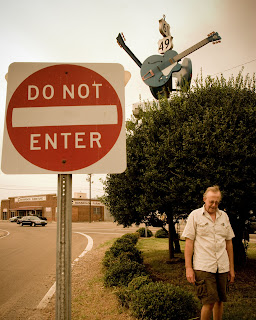 We are in Clarksdale, Mississippi. Robert Johnson wrote Crossroads Blues about big Tommy Johnson meetin' the Devil at the crossroads of Highway 61 and 49 in this town.  The Devil tuned Tommy's guitar so he could play any song he wanted in return for his soul.  The lyric goes " Sun goin' down boy, dark gon' catch me here".


One day's running to New Orleans, this is where the plot of my book, Highway 61 Revisited turns. This is where the relationship that has been "going south" for days finally arrives in the South.


Clarksdale is two hours south of another town we visited, Blythville, AK, the most frightening town we have encountered on 61, officially designated the "Blues Highway".Blythville is in the middle of a rich agricultural region and surrounded by five operating steel mills, yet the town's population has dipped from 15K to 13K in recent years. The 6 block traditional downtown street and all the side streets running off it are filled with run-down storefronts, 2/3's of them empty of commerce. Broken windows... Stained brick...

What is even sadder is that the town tried and failed to revitalize its center. It turned the downtown street into a curvy pedestrian mall with the odd fountain here and there, planters,  historic murals and gay flags on the lampposts. At the beginning and end of the six block strip there are ornate iron arches over the road.


And the town died. Its death witnessed by three storefront evangelical churches...  And five steel mills operated by robots...

Photo above taken at The Crossroads
Photo below taken in Blythville. 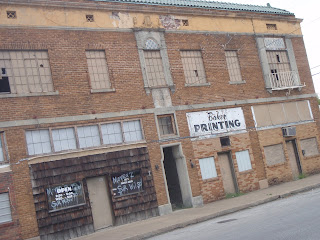