We, as animals, are animals whose first and most trusted sense is our sense of sight.  The newer parts of our brain are connected to our eyes.  We think with our eyes: "Seeing is believing".  We have classically and naively  put our trust in photographs for that reason.  Men and to a degree women use vision as the first test in the mating process, although it is not the most important nor the final test of the suitability of potential mate.
How do all the above musings relate to the title "Big Job".  Heck, I'll get to that.  Keep yer panties on.
I was in the fall woods with Rascal-the-Dog a few days ago.  It was one of those glorious fall days in a glorious wood lot.  It was all there in all its glory--the blue sky, the puffy clouds, the golden leaves both on an off the trees.  An opportunity for taking a photography surely... But no, there was more in the woods than these  static visuals--the cheery tinkle of the bell on Rascal's collar and his fluid way of going as he cast about for bird scent--his moves like those of a canine-gazelle-- an easy rolling gate with explosive yet effortlessly balletic leaps over deadfall and branches.
And while Rascal was casting about for elusive bird smell, I was overcome with smells.  The sweet musty dampness of leaves after the rain the night before was firing the neurones of my memory in an involuntary, yet pleasantly nostalgic, reliving of layer upon layer of falls before, populated by the ghosts of other bird dogs, other hunting trips, and even the wraith of a gentle woodsman father, patiently teaching his tow-headed boy to look for edible mushrooms and elderberries in long-gone falls, just as ghostly now as he.
I knew intuitively it would be a big job to take a picture of that woods two days ago that could evoke the other senses as much as they were evoked by actually being there-- fully present in that precious moment--inhaling the must of the leaves, enchanted by Rascal's merry bell and warned by the high haunting whistle of the wind through the newly naked arms of the majestic maples and stalwart oaks that nothing lasts forever. 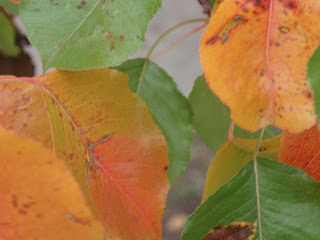 Someone could take such a picture, I am sure.  I was just as sure it could not be me.  I am not good enough yet.  So I left my little pocket camera rest in the left bottom pocket of my hunting vest. I could not do the moment justice and did not insult the moment by trying. It would have been a big job to hit all the right visual notes to accompany the complex sensory symphony playing in my imagination.  Not an impossible job, but a job bigger than my self could accomplish....
at 10/30/2010 02:31:00 PM