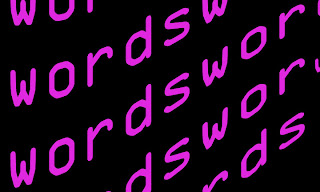 Sometimes ( I was reminded of it again this morning), the written word can be one's best friend or one's worst enemy. In yesterday's blog, I used one particular word in place of what could have been easily been another five different words. Those five different words, I believe, would have conveyed the same meaning--without changing the nature of the thought one whit.  And yet someone read that one word of my dashed-off diatribe and found a whole world of meaning that caused some concern and wrote to me about that concern.
This is where the "enemy" part comes in. The written word is static.  It is what it is and just sits there like a lump, forever.  It does not disappear like words spoken in the wind. A written word can not be discounted. It can not be denied. I will not go away; it is available for reference far into the future. The reader presumes the author did not just spit the word out randomly in the heat of a complex discussion hastily held, but pondered each word choice for the same length of time the reader ponded it or even longer. That is why we must be careful what we write.  We must write to precisely and unambiguously convey the exact meaning we intend.  A hard f_uckng job...  That is why some folks are writers and other folks ain't. It's a hard f_uckng job.
On the other hand, the written word affords the time and distance necessary to say things that do not easily or often pop out a coherent manner from a human speaker standing in front of a live audience working without a script. Not everyone is blessed with the ability to do improv, and fewer still with the ability to do it well. That is why written words can become one's best friend. For example, the person who took issue with the meaning of that one word in my blog would not have had the ability to express the issue clearly standing in front of me just making it up on the spot. So the person wrote about the issue using the tools only written language gives us--time and distance.
In a distant time (tomorrow) I will expand on the above thesis. Stay tuned.
at 10/16/2011 12:45:00 PM