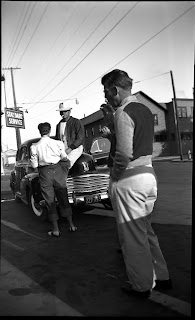 Another time another place. Dead folks... My fahter in about 1947 with two unknown and now unknowable peresons in an unknowable place with an automobile he and his friends of that era surely could not afford.

Smoking cigarettes before thay became unfashionable... Shot on a big hunk of roll film in a camera that produced a goofly long rectangle... The photographer? Unknown...

This is an ordinary scene with ordinary people in an unremarkable town, yet time--time--has created a mystery and wonder in an unthinking sampshot taken before I was born.  And it is time--our ablility to slice time into segments of 1/100th of a second or so and then keep those slices for a long long time that makes photography magic.
at 7/16/2011 07:09:00 AM