Value: Part 2 of A Change in the Direction of My Thinking

I am an atheist. I believe in a random and uncaring universe to which sentient beings attribute meaning and perceive patterns and impose a kind of order. Nothing is permanent or has intrinsic value. That is not the same as Nihilism. I believe we sentient beings make choices and those choices matter (at least to us).

When, yesterday, I talked about MM's photograph, and why it is "good" and why it has perhaps greater validity  because it is not constructed from odds and ends on Photoshop and is the work a visual genius who creates her art in 1/500ths of a second bursts but is less noble because it is not an oil painting with weeks of painstaking brushwork, I am exploring the subject of how we make our choices in ascribing value to an object of human creation.

Let me skip to a body of work from another photographer who has exhibited in and is represented by a prestigious gallery. Her work is printed on large, but not monumental, pieces of ordinary colour photographic paper.  Her photos depict artificial fishing lures (plugs) hanging from a line, placed in the centre of the frame against a whitish seamless backdrop.  The lures are not antiques or unusual in any way. The compositions are artless. There is no story and no imagination apparent.  It is simply an artist (sic). saying "fuck you" to the viewer.

She is saying, in essence, "I am an artist and you may not question me; my work is internal and has no meaning."

I don't think that "fuck you" is a particularly new or revolutionary expression in art.  Perhaps the first time an artist took a shit in a Mason Jar and got someone to exhibit it, it was edgy. It's shocking artlessness called into question a lot of ossified notions about what art could be.  The turd in a bottle had value for its novelty and its attack on convention. The turd is no longer new or edgy nor does it or these fishing lures have any further value as art. There is no concept beyond "fuck you."

I can create in my mind's eye a myriad of visual possibilities for using fishing lures.  I like a photo of a fishing lure in the mouth of a frozen fish or a rectangular package of frozen fish. I like the lure in the mouth of a real fish smaller than the lure--a little goldfish or guppy. I can imagine the lure in the mouth of a rotting fish or a skeletal fish.  Or attached to a huge blow-up child's pool-toy fish.  Or a hundred lures in the mouths of a hundred of those motion detecting plastic talking bass installed in a room in a gallery--all chattering as the patrons pass by saying something ridiculous or disturbing with all the fishing lines connected to a single point near the ceiling at the end of a fishing rod held by _____fill in the blank.

None of those above visual scenarios I have imagined for your benefit say "fuck you". Some are funny, some are profound, some are delightfully ambiguous but they are all legitimate artistic expressions. The woman who created the fishing lure photos, and worse, the woman gallery owner who exhibited them are guilty of the crime, at minimum, of insulting the public and crass exploitational narcissism at the worst.  "Fuck you" is post-modern, to be sure, but surely we have moved beyond the post-modern to a new value-based aesthetic. 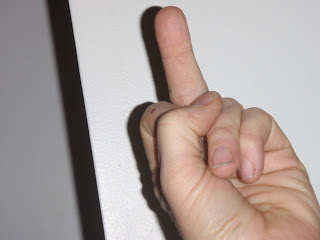