A Change in the Direction of My Thinking

Unwittingly, I have been blogging for a month or so, but I think really starting to build the bones of a book on what I term "a post-photographic aesthetic".   If "god is dead" was the phrase that began a whole discussion in theological and philosophical circles, my phrase "Photography is dead." has been  my springboard for discussion in this whole blog.

The art world as a whole has been grappling with the "death of art for nearly a century. I saw the movie "Pollock" last night about the troubled visionary painter Jackson Pollock.  In between Ed Harris chewing up the scenery on his way to either an Oscar or a Razzei, there was lots of discussion about the death of any type of representation in art.

And then I run across a photograph like this one done by my friend MM: 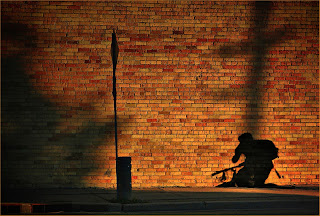 And it takes my breath away despite all my cynicism about the present-day validity of the medium.  Why don't I take a moment to do a post-mortum on this image. The image has unity both because the corner and edges are dark, forming a frame and because it has a unity of colour and texture, for the most part. The image has balance and grace with its two strong verticals-one clean and sharp and the other a fuzzy shadow.  The image is balanced, but not static or boring. But what makes the image so powerful is the sharp organic and kinetic shadow of a human who looks to be falling of a bike or something (what is really happening does not matter). That shape is most intriguing! That shape tells a story, but an unclear and possibly unsettling story that sends the viewer's galloping in several direction.  Put that sharp complex and undoubtably human shape at the bottom of that fuzzy icon shadow Christian cross and the image really set off fireworks in the Western brain. The gutter line at the bottom adds definition but it is at a slight angle and is not a boring border, but just a little off kilter. It adds both solidity and tension.
The only parts of the image not nicely textured are the human shadow form and the sign on the left.  What does the sign say?  What is the human doing or what is happening to the human?  And to highlight the importance of the human shadow, it is underlined by a ray of light.
Everything I have just said is just so much "art critic" bullshit because you can only apply that kind of critique to a painting in which the artist controls and considers every brushstroke in the service of creating exactly the painting he wishes to paint--whether the painting is repersentaional or not. A photographer can not be critiqued in that manner. This image, if I remember properly was captured exactly as you see it,as a Gestalt, if you will, in 1/200th of a second. It arrived on the sensor or the Canon Rebel camera fully formed.  The mind of the photographer, who is a genius in every sense of the word, perceived it, shot it and chose it to display it.
It is not a Photoshop creation, although it could have been. Or it could have been a painting. I wonder, without having any final answer what difference it would make if it were a Photoshop collage or a painting.  I believe, without labouring a point I am not sure of, that the value of the image would go down seriously, if it were cobbled together from odds and ends on Phototshop and the value of the image would increase by orders of magnitude if it were an oil painting.
And now we are talking about value. I will talk more about value in my next post.
at 11/09/2010 01:23:00 PM