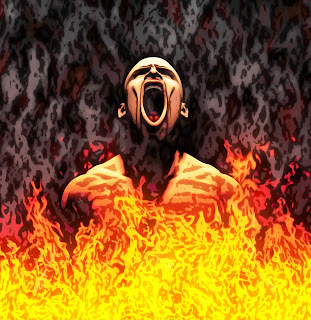 However, the second worst thing about pain is certainly fear—fear that it will never end. Even though a nurse might say  “45 minutes and it’s done” or “just 10 minutes; hang in there.” 10 minutes is NOT 10 minutes and 45 minutes is NOT 45 minutes; any future time is an eternity away at a pain level of “9”. Time stops. The clock ceases to move in your brain, and you no longer believe in the linearity of time; you believe in “the eternal now” and that eternal now is Hell.

One of the definitions of Hell I remember from my theological education is “eternal separation from God.” I am not at liberty to speak of such a separation from the Deity, as I no longer presume to speculate about God, but I am competent to speak of the horror of being segregated from humanity in a prison of pain. If we are social animals, as we are indeed, the worst place just short of Hell must surely be (even for an introvert like me) separation from the human tribe.

No person, no matter how close, not even a spouse or a mother can ever understand a “9”, even if the spouse or mother has at one time herself experienced a nine. The human brain kindly protects us from having any exact memory of a “9”. So unless your significant other is also in the same pain at the same time, there is no one in the universe who can truly be with you on that painful plane of being. Alone...