BLUDGEONED BY THE BLANDNESS OF THE BORG 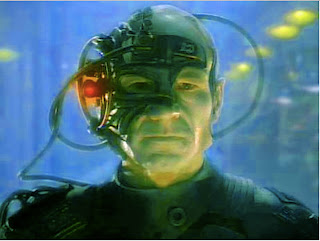 I am in an airport. It doesn’t matter which airport. They are all the same. If the goal of all malls, strip malls, subdivisions, and fast food joints is to look and feel the same the world over, that goal has been achieved in the airport. These glorified bus terminals are the unconscious, yet intentional, archetypal crowning achievement of Western civilization.  One size fits all…
It is impossible to discern any one particular offensive feature of an airport, because there are none. Airports are completely inoffensive in detail.  It is the totality of the airport experience that is offensive. Endless empty spaces, brightly lit—efficiency encapsulated in a flavorless, colorless, odorless cocoon. There are no random acts of whimsy, no evidence of the messy hand of man or the benevolent hand of god in the design. Some great airport-making machine in an airport-making factory spit this and every other airport out of its neutral-colored plastic airport-spitting maw.
But it is the people processing policies that really make the airport the embodiment of modern Western civilization’s descent into a ubiquitous insidious mind-numbing colorless evil.  Saints and sinners, millionaires and paupers are submitted to the same unsmilingly democratic humiliation at security. We are forced to appear barefoot and stripped of all adornment when entering the technological judgment temple of "security". We pass through the arches to be measured by the wizard’s wand.  We are thus separated into worthy sheep or unworthy goats. Woe be to the goats.
None of these processes or procedures is carried out with obvious malice, but with quiet determined efficiency and not particularly well veiled threats. When we are enmeshed in these processes and procedures, we dare not speak, fearing we may utter the wrong words. We dare not make a sudden move or an exuberant gesture. We shuffle along, sheep-like and exhibit no emotion, taking our cues for our emotionless behavior from the emotionless uniformed acolytes who are our examiners and judges. Examiners and examined, we are all part of ‘the system’ and, as such, we may no longer allow ourselves to have personality, particularity or peculiarity.
I am in an airport. The loudspeaker intones, “We are now boarding rows 13 through 21. We are the Borg. Resistance is futile.”
at 11/01/2011 11:58:00 AM