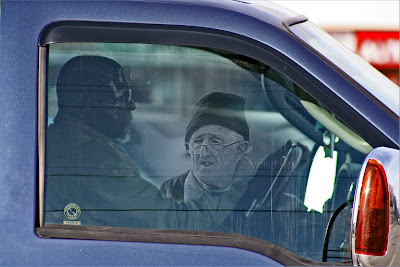 Firstly, this image is another magical example of MM's ability to bring a point of view to a moment in time. The image is perfectly composed in the wild and abandoned way MM has of both ignoring and obeying compositional standards at the same time. I call it the "fuck you" school of composition, but it is really just a more complex and sophisticated way of organizing the elements in a photograph to create tension that serves the subject matter. We are not confused by too many colours. As in the previous example, we only have two colours.  It is a blue photo with red accents. It would still work as a monochrome in greys, but it is more striking the way it is. The image is full of contrasts that jolt the eye: colour contrast, age contrast. racial contrast (I think), figures in and out of the vehicle, sharpness and blur, and things seen behind glass and things seen without the glass intervening. This is a dream scene.

There is, without a doubt, a story here, but a story that would only make sense to the unconscious mind It is the product of an artist who clearly has a very porous barrier between the conscious and unconscious mind.

As Humphrey Bogart as Rick Blaine said in CASABLANCA,


This photograph is not an accident, Rick.